The history of a house is inextricably linked to the history of a town and the events that involve its owners, to reconstruct it is often difficult and the history of Villa Fornari, like that of the many Villas that were built in the valleys that surround Camerino in the seventeenth and eighteenth centuries, is often cloudy and at times completely dark.

From the date found inside the little chapel annexed to the Villa it is inferred that building commenced in the early 1700s. 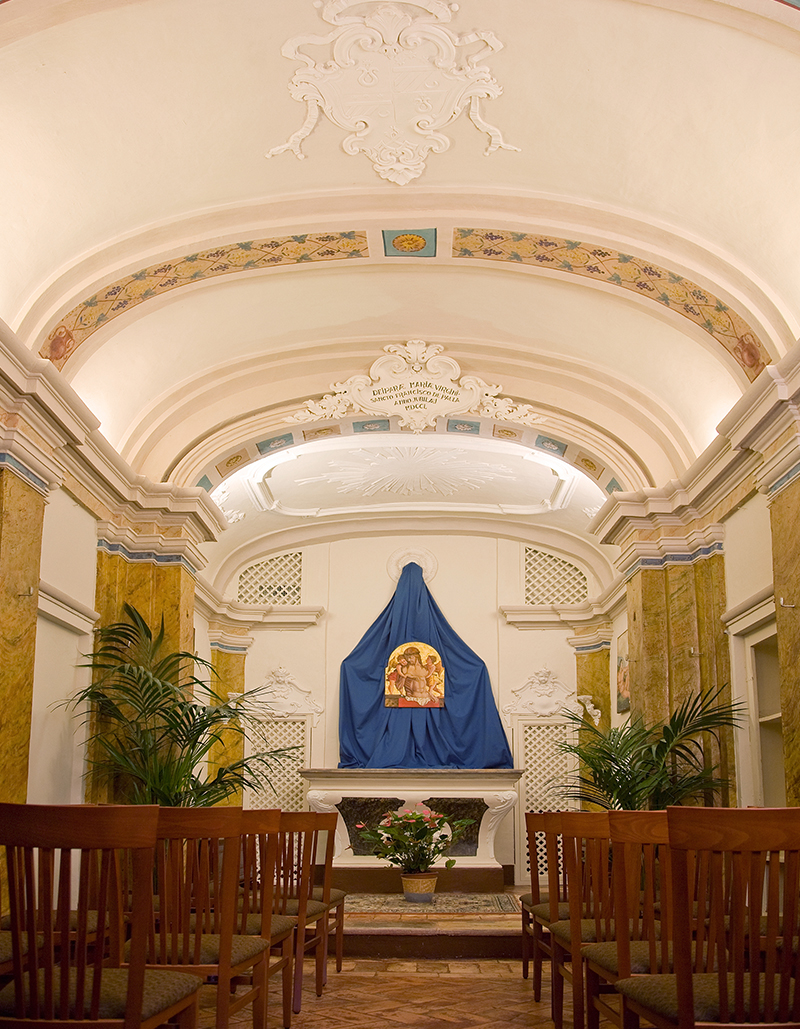 First owned by Emidio Doncecchi, son of Giovanni da Camerino; born in Ascoli Pceno in 1787, he married Rosa Beri, daughter of Giuseppe Beri and Candida Romiti. The Beri family was one of the richest and most prominent families in eighteenth century Camerino. After the death of Doncecchi, ownership passed to his wife Rosa Beri, who after two years married Carlo Fornari.

The Fornaris, from Fabriano, were industrialists in the leather and paper industry; their progenitor was Antonio Fornari, the first person to use a filigree mark in the paper industry (the Vitruvius Codex in the Vatican library). When Rosa Beri died ownership passed to her husband Carlo and their son Lamberto.

Thanks to a careful restoration which was undertaken after many years of neglect, transforming it into the elegant Relais it is today, Villa Fornari has been given a new life and welcomes its guests into its refined surroundings.

We use cookies on our website to offer you the most relevant experience by remembering your preferences and repeat visits. By clicking on "Accept" you agree to the use of ALL cookies. However, you can visit the cookie settings to provide controlled consent.
Cookies SettingsAccept AllReject
Rivedi il consenso

This website uses cookies to improve your experience while you navigate through the website. Out of these, the cookies that are categorized as necessary are stored on your browser as they are essential for the working of basic functionalities of the website. We also use third-party cookies that help us analyze and understand how you use this website. These cookies will be stored in your browser only with your consent. You also have the option to opt-out of these cookies. But opting out of some of these cookies may affect your browsing experience.
Functional
Functional cookies help to perform certain functionalities like sharing the content of the website on social media platforms, collect feedbacks, and other third-party features.
Performance
Performance cookies are used to understand and analyze the key performance indexes of the website which helps in delivering a better user experience for the visitors.
Analitycs
Analytical cookies are used to understand how visitors interact with the website. These cookies help provide information on metrics the number of visitors, bounce rate, traffic source, etc.
Advertisement
Advertisement cookies are used to provide visitors with relevant ads and marketing campaigns. These cookies track visitors across websites and collect information to provide customized ads.
Others
Other uncategorized cookies are those that are being analyzed and have not been classified into a category as yet.
Necessary
Necessary cookies are absolutely essential for the website to function properly. These cookies ensure basic functionalities and security features of the website, anonymously.
Analytics
SAVE & ACCEPT
Powered by